Introduction: Diagnosis of high-risk maternal pregnancy is one of the most important issues during pregnancy and can be of great help to pregnant mothers. Also, early diagnosis can reduce mortality and morbidity in mothers.

Material and Methods: In this study, the data of 1014 pregnant mothers were used, which includes 272 people with high-risk pregnancies, 742 people with medium-risk and low-risk pregnancies. Also, the data include six independent variables. A combination of Bayesian belief network algorithms and particle optimization was used to predict pregnancy risk.

Results: For validation, the data model was divided into two sets of training and testing based on the method of 30-70. Then the proposed model was designed by training data. Then the model for training and testing data was evaluated in terms of accuracy parameters 99.18 and 98.32% accuracy were obtained, respectively. It has also performed between 0.5 and 8% better than similar work in the past.

Conclusion: In this study, a new model for designing Bayesian belief network was presented and it was found that this model can be useful for predicting maternal pregnancy risk.

In 2010, 800 pregnant women lost their lives due to complications and complications of pregnancy (during pregnancy, during childbirth and after childbirth) worldwide, bringing the number to 287,000 per year, while Such deaths can be prevented by timely diagnosis of high-risk pregnancies and simple measures and provision of basic facilities and equipment. Statistics show that worldwide, the death rate of mothers in rural and poor areas is higher than in urban and affluent areas. 99% of maternal mortality worldwide occurs in developing countries. Overall, out of 800 maternal deaths (daily), most of them died due to severe postpartum hemorrhage, hypertension, pregnancy poisoning and unsafe abortion [1].

Pregnant mothers with high-risk pregnancies need special care to ensure their health and that of the fetus. These people need to see a doctor more often and may need more tests and ultrasounds during pregnancy to monitor the health of the mother and fetus. These cares will help the doctor to diagnose any medical problem quickly and take the necessary measures [3].

Many studies have been conducted in the field of high-risk pregnancy prediction, including in 2020, a study using the decision tree was presented for this prediction. Data for this study were collected using IoT technology and HIS software. In this study, the data of six hospitals in the period 2018 to 2020 were used and also the data include six independent variables and one dependent variable; In this study, it was shown that the decision tree algorithm has been better in predicting the model than similar methods and has reached 97% accuracy. Also, WEKA and Python software were used for implementation and it was shown that Python software has a better output than Weka [5].

In 2020, a study was presented using intelligent algorithms to predict high-risk pregnancies. In this study, the logistic regression decision tree algorithm was used [6]. The structure of this algorithm is such that a logistic regression function is executed in the roots of the decision tree instead of the final answer. The output of this research is 97.96% accurate. The data of this study include nine independent variables and one dependent variable. It was also shown that increasing the age of mothers has a direct effect on high-risk pregnancies [7].

One of the important aspects of the study of this disease, which has not been comprehensively considered so far, is the discovery and extraction of the laws underlying

Highly accurate and interpretable data [9]. Therefore, an algorithm that can be interpreted from the physician's point of view and can use these rules without a computer must be presented. Mothers presented. To build a Bayesian belief network, an expert person or a meta-innovative algorithm must be used. In this study, using Bayern Bayesian particle optimization algorithm, this network is designed that this network can predict high-risk pregnancies of mothers.

Percentage of data breakdown by type of pregnancy risk [10]

The particle optimization algorithm must specify the structure of the study variables and what level of the Bayesian belief network each variable is located. To do this, the proposed structure is defined as: 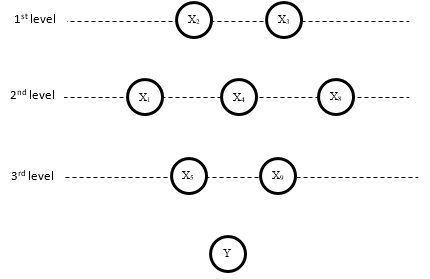 An example of the grading structure of belief network variables

Each variable is then linked to the next level variables. Fig 2 shows the structure of the connections in Fig 1. 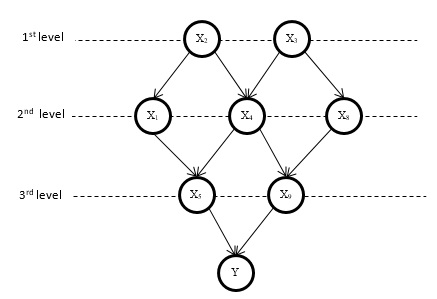 The particle optimization algorithm determines how to rank the independent variables so that the structure of the Bayesian belief network is optimally designed. The optimization parameter in this issue is considered to be the classification accuracy.

The particle length is defined as the number of variables in the problem. Each particle points to a variable and its value is defined between zero and the number of variables. For example, if there are 10 independent variables in the problem, the particle length is defined as 10. And the values of each of its cells can be values between 0 and 10. If zero is considered, it means not considering it is a variable, and if it is five, it means that this variable is at level five. The position shown in Fig 3 is a two-particle structure proverb.

As shown in Fig 3, some surfaces may be node-free, so those surfaces are removed. For example, in Part A of Fig 3, level one has no nodes, so this level is removed. The number of artificial particles is continuous, so by the round function the amount of continuous space enters the discrete space. Generates a particle optimization algorithm with different Bayesian networks so that the best Bayesian belief network is constructed.

The appropriate initialization for the position of each particle is defined as follows in Eq 1.

Where xmin and xmax are the minimum and maximum values for each particle, respectively, and the value of xmin is zero and the value of xmax is equal to the number of independent variables, and r ~ U (0,1) has a uniform distribution. 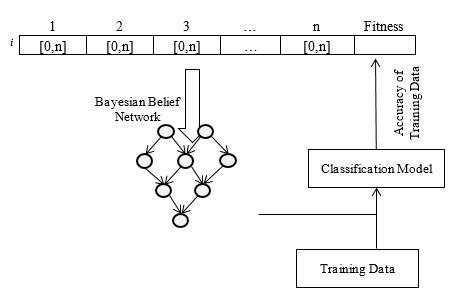 One of the important aspects to determine the efficiency and accuracy of an algorithm is how the compromised capability between Explore and Exploit is compromised by the proposed algorithm. Explore feature is the ability of a search algorithm in different areas of the search space to find the optimal. Exploit, on the other hand, is the ability to focus the search around a potential area to improve the candidate solution. Therefore, we created a suitable solution between these two conflicting goals, which is achieved by speeding up the PSO; which is observed in Eq 2 [13].

Find the appropriate value of v_ (max, j) in order to establish two types of equilibria, which are as follows:

Therefore, the value of v_ (max, j) is considered as a fraction of the amplitude of each dimension. Which is observed in Eq 3 [14].

Whenever one of the following two conditions is met, the algorithm stops (this value is calculated by trial and error)

The structure of the proposed algorithm

It consists of the following six steps:

Step 1: Initialize the initial particle parameters according to Eq 1.

Step 2: Update the best local position of the i particle for all particles.

Step 3: Optimize the best global position of all particles.

Step 4: Calculate the New Velocity of All Particles Using Eq 2.

Step 5: Calculate the New Location of All Particles Using Eq 5.

Step 6: Repeat steps 2 to 5 until the exit condition is met.

At this stage, the proposed model is evaluated. In the first stage, the data is divided into two sets of training and testing. Then, the Bayesian belief network is created by the training data, and two evaluations are performed in the training and testing sections. The data is divided into two sets of training and testing by the method of 30-70. Out of 1014 data codes, 710 records for training data and 304 records for test data are considered, then the particle optimization algorithm is executed on 710 records. And the output of Bayesian network optimization algorithm is this network is evaluated by training and testing data. The process of generating Bayesian belief network and evaluating it is performed 100 times and the average accuracy of 100 times the execution of the algorithm is considered as output. The accuracy formula is stated in Eq 6. In this regard, accuracy is defined as the amount of correct prediction to the total number of predictions. In the particle optimization algorithm, the parameter number of particles must be adjusted. This value changes from 10 to 100 with step 10. The output of the algorithm for the study data is stated below. Therefore, the boxplot diagram for training and test data is drawn with the help of five parameters: minimum output, first quarter, average, third quarter and best quarter output. Fig 5 shows the accuracy of the training data output and Fig 6 shows the accuracy of the test data. 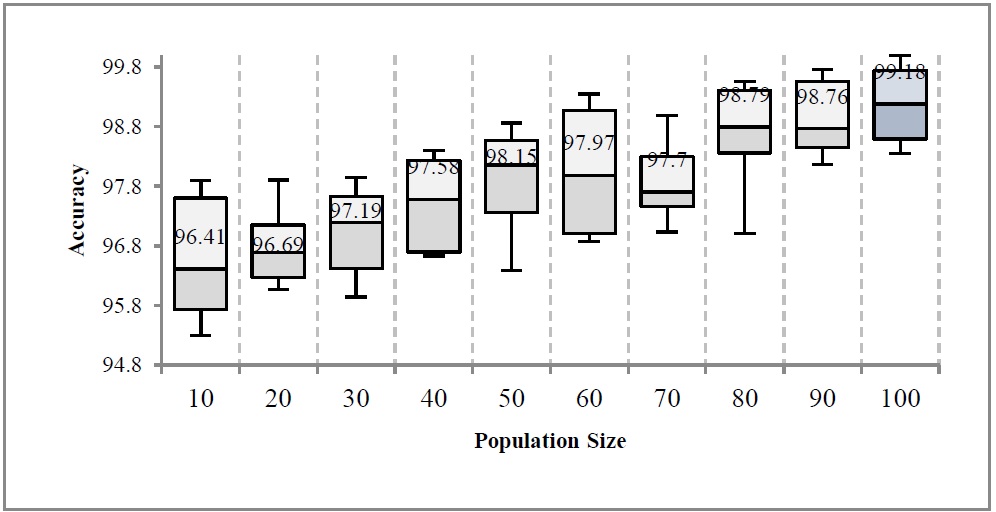 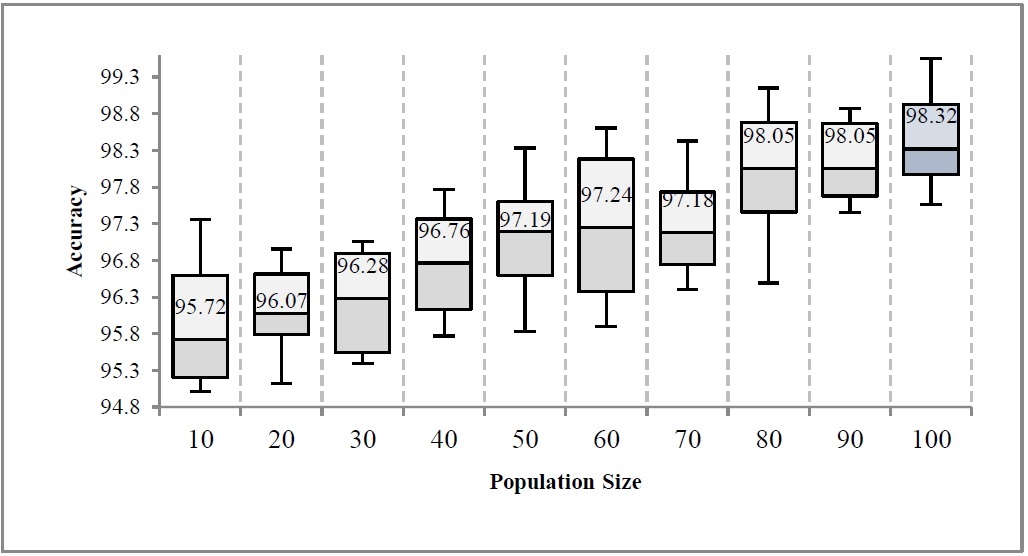 Comparison of the proposed model with other methods

As can be seen in Table 3, the proposed method performed better than the other three methods, and the accuracy of the model was 8.32% to 0.36% better.

It should be noted that the proposed hybrid algorithm is implemented with MATLAB language and another important point is that the selection of the desired factors in the input of the algorithm is very important, because the output is based on these input factors and any changes in this Factors can be applied and the output result was calculated using trial and error and its value was optimized.

In this study, an error of 1.7% was reached and compared to similar methods, it worked between 8% and 0.5%. In the article [7] it was stated that the best method for this problem is logistic regression decision tree algorithm, but in this research, it was found that Bayesian belief network can perform better. In studies [15-18], the importance of Bayesian belief network in diagnostic fields was expressed, which was proved in this study.

According to the research presented in this article, the use of data mining technique is a good way to predict high-risk pregnancies of pregnant mothers, the results of the combined hybrid algorithm indicate this. Also, in order to do this, classification was used first and by stating the reasons, it was stated that using the combination of particle optimization and Bayesian belief network has many advantages over other classification methods and understanding the output result in it. It is far simpler and more understandable than other algorithms.