Email the author (Login required)
About The Author

The infections with the Nipah virus (NiV) are highly infectious and may lead to severe febrile encephalitis. High mortality rates in southeastern Asia, including Bengal, Malaysia, Papua New Guinea, Vietnam, Cambodia, Indonesia, Madagascar, the Philippines, Thailand, and India, have been reported in NiV outbreaks. Considering the high risk of an epidemic, NiV was declared a priority pathogen by the World Health Organization. However, for the treatment of this infection, there is no effective therapy or approved FDA medicines. RNA-dependent polymerase RNA (RdRp) plays an important role in viral replication among the nine well-known proteins of NiV.

Molecular docking analysis reveals that Uprifosbuvir is the most suitable inhibitor for RdRp of Nipah Virus regarding the binding affinity and binding in the target cavity. Although, such studies need clinical confirmation.

The role of anti-viral molecules as a ligand against RNA-dependent RNA polymerase is critical important in the current era. Computational tools such as molecular docking has proven its power in the analysis of molecules interaction. Our analysis reveals the Uprifosbuvir might be a candidate RdRp inhibitor. This study should further investigate the properties of the already identified anti-viral molecules followed by a pharmacological investigation of these in-silico findings in suitable models.

Nipah virus (NiV) was originally identified during an outbreak in Malaysia in 1999, was associated with the Hendra virus in the Paramyxoviridae group [1]. Since then, sporadic NiV outbreak outbreaks have been reported in several countries, including the latest in Indian Kerala [2]. NiV is endemic, highly pathogenic, and can infect most species of mammals. Henipa virus natural reservoirs seem to be Pteropus-type fruit bats [3]. However, NiV has a wide range of hosts, such as humans, leading to serious neurological, respiratory, and cardiovascular illnesses. Hosts include horses, dogs, dogs, pigs, cats, and hamsters. Since NiV can be passed from zoonotic to human routes, the risk for outbreaks is very high [4]. Particularly, The NiV outbreaks are the most prominent for human-to-human transmission. About 600 cases of NiV human infections were reported between 1998 and 2015, where the fatality rate in Malaysia was 38% and 43-100% in India and Bangladesh [2].

Persistent pathogenicity, high mortality, and lack of effective therapeutics against NiV infection, NiV is a biosafety level 4 (BSL4) pathogen, which consider NiV as very dangerous virus [5]. Some efforts have been made to manage NiV to search for small molecular therapy for various structural proteins [6, 7]. Favipiravir has been shown to combat viral reproduction and transcription in NiV and HeV in a recent in vitro study [8]; Also reported was R1479 (4′-azidocytidine) to inhibit various family members of Paramyxoviridae [9]. Nevertheless, no approved medicines are available for efficient human usage despite these efforts to develop such inhibitors. While Ribavirin is not an established as NiV treatment, it is especially used in emergency cases as a first-line treatment strategy for acute NiV symptoms [10]; It does, however, has different side effects during NiV therapy, such as nausea, vomiting, and convulsions [11]. Known for treating NiV, small molecules inhibit host proteins such as Interferon Regulatory Factor 3 and RIG-I-like receptors, which contribute innate immune system [12]. No approved therapeutics are available to efficiently use in humans despite these efforts to develop such inhibitors. Therefore, the definition of potential NiV inhibitors is an eminent requirement. Various efforts were made to manage NiV infection by looking for small molecular therapy for various structural proteins [6, 7, 13, 14].

The NiV virus structure is a parallel, long, coiled-coil, tetrameric with a small helical cap as tethers of the viral polymerase to nucleocapsid and multimeric phosphoprotein. Nipah virus has a single-stranded, negative-sense RNA genome encapsulated by the nucleoprotein (N) and transcribed and replicated by the polymerase protein (L). Hence molecular inhibition of RNA polymerase is one of the prime strategies for treating NiV infection. Also, as an effective strategy to interrupt virus adhesion with the host, the inferences regarding the inhibition of interactions between RNA polymerase and RNA provide the structural basis for screening antiviral therapeutic inhibitors against NiV.

The most reliable and widely used approach in the early stages of drug discovery is structure-based molecular docking [15]; however, information on their potential side effects leading to toxicity or clinical safety problems is not generally taken into account [16]. The drug's off-target toxicity and chemical structure that leads to its non-optimal efficacy [17] are predicted to cause these side effects [18]. Therefore, there is no understanding of the assessment of drug toxicity at the molecular interaction level, relying only on this method. Different methods and techniques should be used to control any possible pandemic of the Nipah virus, such as using machine learning for detection of different strains [19, 20], early detection of respiratory syndromes, and developing new drugs or scanning for the possible molecule that may target and inhibit viral life cycle [21].

Interactions between drugs and their direct target frequently lead to differential expressions of downstream target regulated genes [22], which cause potential activation, repression, or dysregulation of downstream pathways. Here we introduce a molecular docking study for fourteen possible molecules and drug may act against RNA-dependent RNA polymerase of Nipah virus. Some previous efforts developed a vaccine based on analysis of the whole proteome [23].

The method, software, and result analysis is imported from Habib’s work [14].

The chemical structures of selected ligands were retrieved from PubChem (https://pubchem.ncbi.nlm.nih.gov/), DrugBank (https://go.drugbank.com/), and SANCDB (https://sancdb.rubi.ru.ac.za/) in Protein database (PDB) format and then converted autodock ligand in the format of .pdbqt format using openbabel.

RNA-dependent RNA polymerase (RdRp) of the Nipah virus still has no identified structure. A homology model for the Nipah RdRp was built using the Swiss Model webserver [24]. We used the available RdRp sequence of the Nipah virus to build a model for the unknown structure. SWISS-MODEL shows RNA-directed RNA polymerase L of Parainfluenza as a similar structure with 36% identity and 95% coverage, which was the best result among all templates. Analysis of protein structure was quite good where Ramachandran plot archives 84.82% in the favored region (Fig 1) and MolProbity score was 1.98. 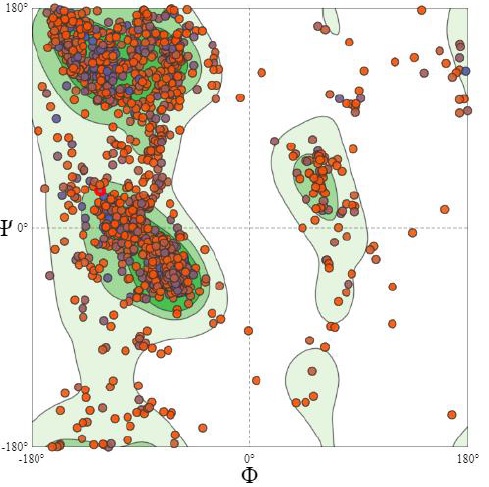 We studied probable physiological properties of each selected ligand to cross the blood-brain barrier, human intestinal absorptivity, caco-2 permeability, as toxicity, carcinogen character, acute oral toxicity, rat acute toxicity, and fish toxicity. Properties of selected ligand among the selected ligands, Acetaminophen were having the best lowest synthetic accessibility, which means it is easy to synthesize. Guanosine-5'-triphosphate was able to pass Blood-Brain Barrier (BBB+) and not substrate or inhibitor for different Cytochromes. On the other hand, Uprifosbuvir is intestinally absorbable while it is 545.91 in MW.

Setrobuvir showed the highest binding affinity with CETP via −9.6 kcal/mol binding energy. However, the binding was not in the accurate binding site. Uprifosbuvir achieves -7.4 kcal/mol binding energy from the six binding affinity molecules, but it is still located within the binding cavity. Remdesivir is a known anti-viral drug used recently against coronavirus, which binds with -8.1 kcal/mol but outside the ligand-binding cavity. The best molecules were Guanosine-5'-triphosphate (Fig 3), Mericitabine (Fig 4), and Uprifosbuvir (Fig 5). 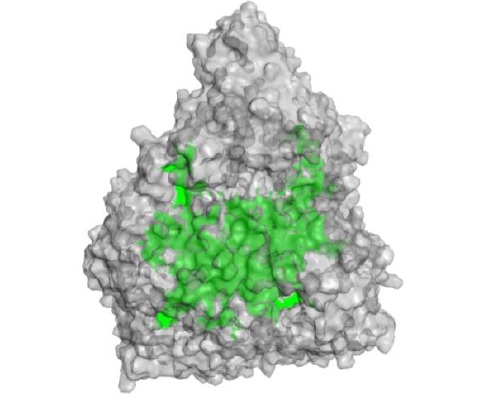 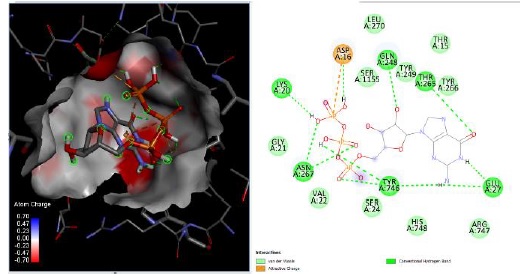 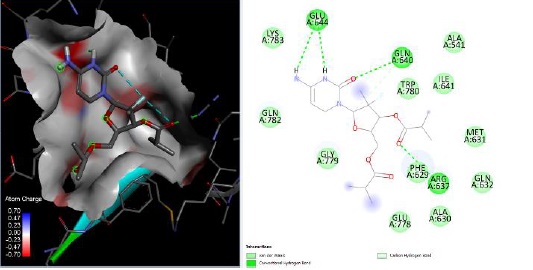 The current study was designed to understand the interaction of active molecules and drugs used recently in the coronavirus pandemic in inhibiting the Nipah virus by suppressing RNA-dependent RNA polymerase. Although X-ray crystallography and nuclear magnetic resonance techniques are utilized to understand the ligand-protein interaction, there is no known structure of RdRp. 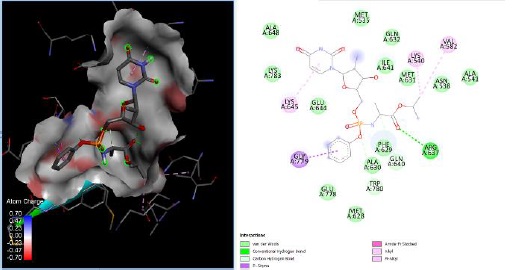 However, homology modeling was utilized to predict the structure of the Nipah RdRb using SWISS-MODEL. The location where the ligand should bind is identified. Molecular docking was performed on fourteen molecules and drugs to assess the binding affinity. The order of ligand according to affinity was: Setrobuvir, Remdesivir, Octahydroeuclein, Sofosbuvir, Uprifosbuvir, Adenosine-5'-triphosphate, Ribavirin, Galidesivir, Guanosine-5'-triphosphate with binding affinity -9.6, -8.1, -7.8, -7.6, -7.4, -7.4, -7, -7, -6.8 respectively. Many of them were located in the RdRp cavity, but the best affinity and target molecules were Guanosine-5'-triphosphate, Mericitabine, and Uprifosbuvir with binding affinity -6.8, -6.5, and -7.4, respectively. As shown in (Fig 5), Uprifosbuvir forms many different types of bond-like: Van der Waals, Hydrogen bond, Pi-Sigma, Amide-Pi-Stacked, Carbone-Hydrogen bond, Alkyl, and Pi-Alkyl. Guanosine-5'-triphosphate is only one form bond with an attractive charge between phosphate atom and Asparagine amino acid. After docking analysis, Uprifosbuvir was the only ligand suitable for RdRp inhibition. However, some reports show that Uprifosbuvir has a reverse or harm effect on vaccine-drug interaction. The therapeutic efficacy of Adenovirus type 7 vaccine, Anthrax vaccine, BCG vaccine, Rubella virus vaccine, Typhoid Vaccine, and Yellow Fever Vaccine can be decreased when used in combination with Uprifosbuvir. Although, Uprifosbuvir is an approved drug for the Hepatitis C virus.

The present study represents the possible role of anti-viral molecules as a ligand against RNA-dependent RNA polymerase. Results from acute oral toxicity, rat acute toxicity, and fish toxicity predict the molecules are non-toxic, absorbable via the human intestine, and able to pass the blood-brain barrier. All the selected ligands have scored well drug-likeness scores that affect the compound's physicochemical property either towards pharmacological action or towards the drug development steps. The obtained Log S value represents the solubility of the drug molecules, which would further help in the pharmaceutical industry's formulation steps. Molecular docking study analysis reveals the Uprifosbuvir might be a candidate RdRp inhibitor. This study should encourage further investigation of the properties of the already identified anti-viral molecules followed by a pharmacological investigation of these in-silico findings in suitable models.

The author declare no conflicts of interest regarding the publication of this study.