Evaluation of the effect of informing patients through text messaging on antibiotic prescription by physicians in outpatient setting: A study protocol

[4] Department of Microbiology and Immunology, Faculty of Science, The University of British Columbia, Vancouver, BC, Canada

Irrational prescription of antibiotics has become a major global concern, and not only does it have health-related consequences, but it also affects countries’ overall economy. Based on reports and studies, antibiotics are prescribed in approximately 50% of prescriptions in Iran which can demand by patients as a major cause. It is anticipated that increasing the awareness and understanding of both physicians and patients, regarding the antibiotic use and resistance, could play an important role in the rational prescription of antibiotic medications. In this study, we will examine the effect of informing patients via text message right before their appointment on the proportion of prescribed antibiotic medications.

In this study, a randomized control trial (RCT) will be conducted. The setting in which the study will be carry out, consists of 64 physicians (29 general physician and 35 specialist). Unit of randomization will be physicians based on the proportion of their prescriptions that include antibiotic medications (PIA). The first arm of the study is the intervention group, which consists of the patients receiving three text messages in the clinic’s waiting rooms. The second arm is the control group, and consists of the patients who won’t be receiving any text messages. The content of the text messages focuses on the consequences of self-medication with antibiotics, the fact that the use of antibiotics is not an option for curing viral diseases including cold, and it also asks the patients not to demand antibiotics by trusting their physicians.

The main variable that will be measured is the proportion of prescriptions that include antibiotic medications.

Antibiotic prescription is the important health service index in each country that irrational use of them in human disease, especially in infectious diseases is the major problem. Reports and studies have shown that about 50% of prescriptions include at least one antibiotic drug [1-4]. In 1997, Centers for Disease Control and Prevention (CDC) illustrated that 50% of antibiotics that are prescribed in upper respiratory tract infection (URTI) are unnecessary [5]. Irrational prescription of antibiotic include improper prescription and inappropriate prescription, imposing exorbitant costs on countries and people that foster antibiotic resistance. As the result, 2011 year was named” Antimicrobial resistance: no action today, no cure tomorrow” by World Health Organization (WHO) [6, 7]. Systemic antibiotics prescription has growth of 3.3% annually average since 2000 to 2009, in the other words from 39.1 (DID) in 2000 to 51.3 (DID) in 2009 [8]. Antibiotic prescription trend in 2001 showed that, in Iran, approximately 58% of prescriptions included at least one antibiotic medication, and physicians prescribed antibiotics for 77% of patient who had URTI [9]. It should be noted that, in Iran, approximately $200 billion (USD), which is 13% of pharmaceutical market per year, is spent on buying antibiotics and irrational prescription of antibiotics gives up $200 million (USD) cost [1, 10].

Antimicrobial stewardship has been recommended to improve antimicrobial prescribing quality in acute care [13-15]. Patients’ knowledge, beliefs, and experiences have the strongest predictors role in their expectations for antibiotic prescribing by physicians [16]. Patient education, which is aimed to inform patients about most respiratory tract infection symptoms and how they can be managed, is an important action to reduce patient antibiotic demands [4, 17, 18]. There are two categories of interventions that improve quality and quantity of antibiotic prescriptions in respiratory tract infections. First is the traditional intervention such as printed educational materials (brochures, posters, and pamphlets), outreach education, and face to face education. The second is the interventions that use information technology (IT) tools, including internet portal, electronic mail (e-mail), short message service (SMS) and health information systems [19-21].

The influence and dominance of mobile phone technology, and the significant popularity of Short Message Service, causes this service to have beneficial applications in health care domain; for example, it can lead to statistically significant and cost-effective health behavioral changes [23-25]. In the authors’ knowledge, there is not any study done on the interventions for reduction of patients` antibiotics demands, especially those via Short Messaging Services.

The purpose of this study is to improve patients’ knowledge about antibiotics use in respiratory tract infection via text messages and evaluation of effectiveness of that system on the reduction of antibiotics prescription.

Dar-Al-shafa-e- Imam is one of the popular clinics in Mashhad which administers approximately 780 outpatients daily has been selected. It is a charity clinic which has a total of 64 physicians (29 general physician and 35 specialist).

Participants will be presented from clinic director whose at least three months before the intervention were active. All of physicians were engaged to this study. In the other word, we don’t have any sampling. Based on the number of prescriptions in previous years, we anticipated that each group will have about 35000 patients in 3 months.

Based on rational drug committee`s policy in Mashhad University of Medical Sciences (MUMS), all physicians of targeted setting are recruited in study.

Data will be obtained from MUMS prescriptions database. In this database, outpatients’ prescriptions data are obtained from two big insurance companies (i.e. the Social Security and Health Care Services), which have used for National Committee of Rational Drug Use missions since 2002. Unit of randomization is physicians based on proportion of their prescriptions that include at least one antibiotic medicine (%).The percentage of prescriptions that have antibiotic drug in both general practitioner and specialist for 3 months before intervention time as base line will be calculated. Then participants will be divided by two groups (higher than median and lower than that). Randomization will be carried out by Microsoft® Excel© 2013.

In intervention group, the phone numbers of patients is taken by the clinic receptionist.

The patient will receive 3 text messages with 2 minutes as the interval time by PMS. The translation of the text messages are: (1) Trust to physicians’ diagnosis and denying to antibiotic demand; (2) No need for antibiotic in most of the common cold; (3) Serious infection and hospitalization may be occurs after self-medication by antibiotics, respectively.

In control group, only the phone numbers of the patients are taken by clinic receptionist.

They won’t receive any messages.

We will follow up this study continuously for three months. For each prescription, date of dispensing, insurance type, medical council number, drugs’ generic codes, and quantity of drugs and their costs will be obtained from the pharmacy information system (PIS) which is uploaded on MUMS prescriptions database.

We will upload prescriptions’ data to prescription monitoring system (PrMS) each month (for 3 months), and quantitative analysis will be done. PrMS is a new developed web based software by our team which can analyze prescriptions, and send three types of feedbacks (SMS, Email and internal message in electronic portal) to physicians about their practice. The analysis will be done based on the intention- to- treat principle. Proportion of prescriptions that have at least one antibiotic item and amount of drugs item include antibiotic by percent in medical group will calculated. As the final step, comparison analysis between intervention and control groups will be done by Chi square test and summary statistics according to the data (median and interquartile range, percentage with a 95% confidence interval) and the effectiveness of this types of interventions in antibiotic demands will be assessed. 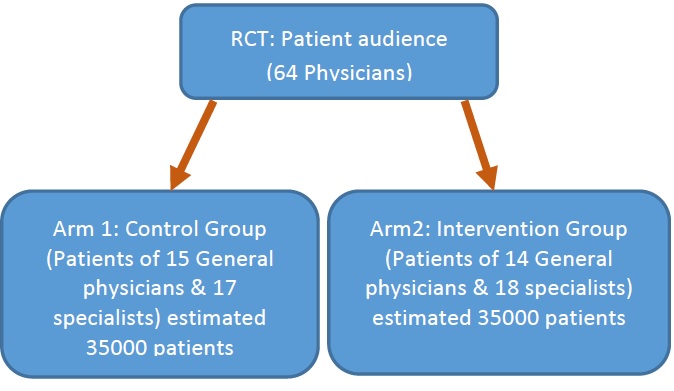 Ethics approval and consent to participate

The intervention will be targeted to patients, and it will not to need to get consent from physicians.

The patients that take usual care and MUMS Ethics Committee that reviewed the proposal, the patients will not be consented to take part.

Availability of data and materials

HV and SE were involved in the initial conceptualization and study design. EN and HV developed the data collection methods; HV piloted these with the help of EN. HV and EN wrote the paper. All authors read and approved the final manuscript. SE is responsible for this manuscript.

This study is a PhD thesis of the first author and has been supported by the Faculty of Medicine and in the meantime as a project in Vice chancellor for research of MUMS with number of 93-08-18-921638.

We thank Dr. Mahdi Hashemi nejad the chief executive officer of Dar-O-alshafa Emam clinic and his colleague Mohsen Shafiee for their support in the design and implementation of software.