We wrote a PHP script to crawl information of Android apps in “health” and “medicine” categories from Cafebazaar app store. Then permission information of these application were extracted.

Most of Android permissions are harmless but significant number of the apps have at least one dangerous permission which increase the security risk. So paying attention to the permissions requested in the installation step is the best way to ensure that the application installed on your phone can only access what you want.

App stores that host hundreds of thousands of applications (apps) are the main distribution channel for mobile health (mHealth) apps and users can download and install third-party apps from these markets [1]. App stores have created a new software deployment ecosystem which are technically different from traditional methods [2-4]. Some third-party developers are malicious, most authors of applications are not security experts and their code may contain vulnerabilities [5].

Android is a privilege-separated operating system which additional security features are provided through permissions. Permission mechanism enforces restrictions on the specific operations that a particular process can perform. A basic Android application cannot do anything that would impact the user privacy or any data on the device, because it has no permissions associated with it by default. In the process of installing an application, the list of permissions that the app requests is shown to the user. The user should decide to accept or cancel installation. These permissions are not shown at any time after than installation step [6]. To make use of protected features of the device, one or more <uses-permission> tags must be included in the app manifest file [7]. For example, Fig 1 shows permission definition in manifest file to monitor incoming SMS messages in the app.

A sample of permission definition in the app manifest file [8]

Several studies have been done on vulnerabilities in the mobile applications but few of them have discussed Android permissions vulnerabilities. A Study by Felt et.al [9] Considered 100 paid and 856 free applications from the Android Market. Selected apps in that survey was not limited to health related topics and did not compare mobile applications based on their categories. In another study [10], requested permissions in a large number of Android applications were studied but they did not mention details of their sample and application’s topic. None of these studies focused on mHealth apps permissions and vulnerabilities. In this survey, we considered only Android mHealth apps in health and medicine categories. Most of Iranian users download apps from Persian app stores. “Cafebazaar” is the largest Iranian Android app store and contained more than 3500 apps in medical and health categories in 2016 [11]. The study aims to describe security challenges of released mHealth apps permissions in Persian Android app store “Cafebazaar”.

We wrote a PHP script to crawl information of Android apps in “health” and “medicine” categories from Cafebazaar app store in August 2019. We also crawled list of permissions used in gathered apps. The information of 3390 apps were gathered in this two categories. After review information 59 apps were excluded because their scope did not relate to medicine and health. Based on the apps description we defined eight subcategories under “health” and “medicine” categories: “drug information”, “traditional medicine”, “fitness”, “health education”, “pregnancy and parturition”, “diet and nutrition”, “health test results” and “self-monitoring”. Permissions of selected apps were overviewed and security challenges from different viewpoints were analyzed.

Six of 15 most frequently requested permissions are dangerous. 1321 applications had writing permission to external storage of phone (40%), 1288 apps had access to read from external storage (39%), 422 apps could read contact list and ongoing calls (13%) and 188 apps requested ACCESS_COARSE_LOCATION and ACCESS_FINE_LOCATION permissions were allowed to access phone location (2%) (Table 2). Fig 2 shows comparison of top dangerous permissions used in studied apps. In this figure, the distribution of apps based on their price and purchase type (free, paid, in-purchase) is also considered. 41% of free apps, 53% of paid apps and 71% of in-purchase apps contained dangerous permissions.

We defined 8 subcategories in health and medicine to compare applications based on their topic in Cafebazaar app store. We also selected top 10 most popular mHealth apps and put them in 8 predefined subcategories. As Table 4 shows, we can see distribution of dangerous permissions in these most popular mHealth apps. WRITE_EXTERNAL_STORAGE, READ_EXTERNAL_STORAGE, READ_PHONE_STATE, GET_ACCOUNTS, ACCESS_COARSE_LOCATION, ACCESS_FINE_LOCATION, CAMERA and READ_CONTACTS are dangerous permissions used in these 80 popular apps. 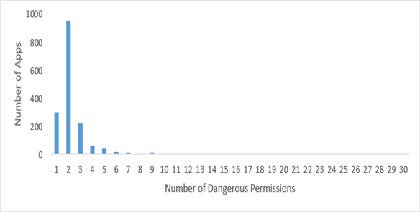 Number of apps group by number of dangerous permissions

Dangerous permissions of most popular mHealth apps in different subcategories

Unnecessary permission warnings in over privileged applications reduced user’s attention to warning about apps vulnerabilities [14]. Although Android’s permission system is intended to inform users about the risks of installing apps, current Android permission warnings do not help most users make good security decisions [6]. The results of a study conducted by Enck [15] showed that only 17% of participants paid attention to permissions during installation and usually Android permission warnings are ignored by users. Most surveys have found that people are very protective of their personal data when asked directly about their privacy preferences [16, 17] but their actions do not always correspond to their preferences [18, 19]. This may be because users overestimate their privacy or they do not understand what actions violate their privacy preferences.

We considered the number of dangerous permissions requested in an app as an indicator of application vulnerability. Storage group permissions are the most requested dangerous permissions in all subcategories. In many mobile applications, some of the information needs to be stored in storage, so access to external storage in these apps should be considered. For example, to store data logs in self-monitoring apps, the application should be able to write to the external storage. It requires WRITE_EXTERNAL_STORAGE permission. Also, to retrieve data stored in storage, display it in the app or report to the user, the application should have access to read stored information. To this end, READ_EXTERNAL_STORAGE permission should be defined at development time. Self-monitoring apps help users creating a healthy lifestyle. These apps let users view a complete history of their health data, including activity, sleep, weight, and monitor blood pressure, heart rate and pulse wave velocity. Users can see their trends, track progress, and improve over time. In self-monitoring apps GPS is used to help users tracking steps. The use of GPS in app requires ACCESS_COARSE_LOCATION and ACCESS_FINE_LOCATION permissions. In some apps, users can share their photos. Due to the fact that access to the camera should exist in these apps, the CAMERA permission is required. Our study results show the apps in self-monitoring subcategory have the highest levels of vulnerability.

There were some limitations in our study. In this study we just considered published applications in Cafebazaar app store as the most popular Persian Android app store. Although there are several other Persian app stores, there is a big difference between the number of released apps in Cafebazaar and other app stores. We had collected and reviewed all apps in both health and medicine categories but it is possible that a limited number of developers put their health-related apps in other categories. We did not consider these mHealth apps in our study.