Middleware for the Integration of Hospital Information Systems

This study was descriptive in nature and was conducted in the form of a survey, with data being gathered via a self-structured questionnaire, in 2014. Seventeen hospitals affiliated to TUMS that have the HIS were recruited for this study. The questionnaire consisted of three parts. Simple statistical analysis was used to determine the integration status of HISs.

The most striking result to emerge from the data is that 64.7% of HISs had database-oriented middleware. Approximately half of surveyed HISs (41.2%) used synchronous mechanism and almost two-thirds of them (70.2%) used web service. Although, 17.2% of HISs use service-oriented integration approach, but the overall response to this question was poor.

The result of the study indicates that the database-oriented middleware facilitate accessibility of the databases, on a variety of platforms. It might be related to the variety of company those developed the HISs. The result showed that the using web services could be helpful to application integration. The results of this investigation show that the HIS companies and healthcare facilities must be considered to the standards of interoperability for development and selection of the systems. Further research should be done to investigate the integration status of HISs in cross-national level and with other information systems in the field of healthcare.

In the healthcare, Hospital Information Systems (HIS) are used to facilitate the management of clinical, financial and administrative information in the hospital and designed to enhance quality of care1. Integrating hospital information systems is very difficult, but necessary. Only in this way that the computerized hospital information systems can be the advanced tools to achieve clinical goals. These should have the specifications of comprehensiveness, integrity, reliability and security, ergonomic quality, comfortable and usability for all user levels [1-7].

Design and implementation of a comprehensive hospital information system with desired functionality and standard, leading to the integration of electronic medical systems [8]. Integrity means that the data collected from multiple units of the hospital or related clinic/center are maintained in the unified database. Information about an admitted patient in the each unit of the hospital (if permitted), is accessible. Integrity is not limited to the patient information, but includes all the processes of the hospital [9].

Although the hospital information systems are used in most health care organizations, but these are often not integrated. The data are incomplete and inconsistent and information flow is discontinuous, because the focus of these protocols is to transfer of data, not on the integration and synchronization [10, 11].

In addition to the internal differences of the hospital, which is due to different activities and different workflows, the external communication of hospitals, also effects on the extent and complexity of the HIS. To establish communications among hospitals, an integrated system is required [12].

Users as a major client of a system, has logical expectations. These expectations include access to all the provided services, simplify and without intra-organizational restrictions and without limitation of place. It is clear that these expectations are not possible without cooperation and mutual influences in different parts of the system to provide services to users.

Generally, the integration must be considered in the following areas:

Much effort has been made to build integration between disparate systems within health care organizations [14-16]. Some have defined the standardized interface for the object-oriented services in the healthcare domain (the Common Object Request Broker Architecture or CORBA is an example that allow sharing of activities such as access and control between different systems) [15, 17].

Azami et al. stated that data, functions and workflows are the fundamental factors for integration of a system. Due to the complexity of clinical data in terms of the number and type, backing up all in one storage is not a good solution for heterogeneous systems. In this case, the middleware can function as a virtual data center for all clinical data. According to Azami et al. functional integration can be performed through a set of web services [2].

Liu Jing Yong et al, defined middleware as a tool for integration of the healthcare system and classified middleware according to the communication models into four different categories, including: procedural, message-oriented, transaction and object middleware [18].

Web services as a distributed middleware, is an ideal solution for the interoperability problems of system that referred by Zhang et al. [19].

Batta and Mukherjee stated that web service technologies have been proposed in response to some interoperability challenges of heterogeneous health information systems (HIS). They also stated that service oriented architecture based on message is a pragmatic approach to solve integration problems of HIS [20].

Most important steps to integrate hospital information systems, including to Perform a complete analysis to understand various aspects of the system, Understanding the function of the system components and the relationship between them to achieve a basis for designing and implementing a suitable and efficient system [21].

This was a descriptive study that investigated the status of application integration in the hospitals, performed in 2014. Statistical population included the affiliated hospitals of TUMS, which had a HIS. Seventeen hospitals investigated.

Data were collected using a self-structured questionnaire. The design of the questionnaire was based on a literature review of journal articles, books and other available library resources about integration tools and techniques. For gathering data, we interview HIS handlers in the hospitals. The questionnaire consists of three parts. The first part deal with demographic information about participants, including six closed questions such as name, position and specialty of interviewee. The second part of the questionnaire consists of information about hospital information systems in terms of the name of the developer and supporter companies, subsystems of the HIS and the relation among them with six closed and semi-open questions. Finally, the third part of the questionnaire deal with the integration of HISs with 19 questions (close and open). For instance, the type of middleware used by HIS, the kind of middleware configuration, the communication mechanism and the application integration approaches. Descriptive statistics used to analysis the results.

In this study, we used the hospital information systems data from 17 hospital affiliated to TUMS. According to the research findings, the majority of hospital uses the HISs and the company that has developed the system, it is responsible for the support of the system. Six types of HISs from different companies were used in these hospitals, including the Rahavard Rayaneh (3), Tirajeh Rayaneh (6), Pooya Samaneh Diva (2), Rayavaran (4), KianTech (1) and Farabi (1).

The frequency distribution of subsystems in the HISs in the affiliated hospitals of TUMS shown in Fig 1. It seems that the need for an integrated information system in admission and discharge, laboratory and pharmacy units have been feeling more than other sectors. 15 participants stated that all of information systems can exchange data together. 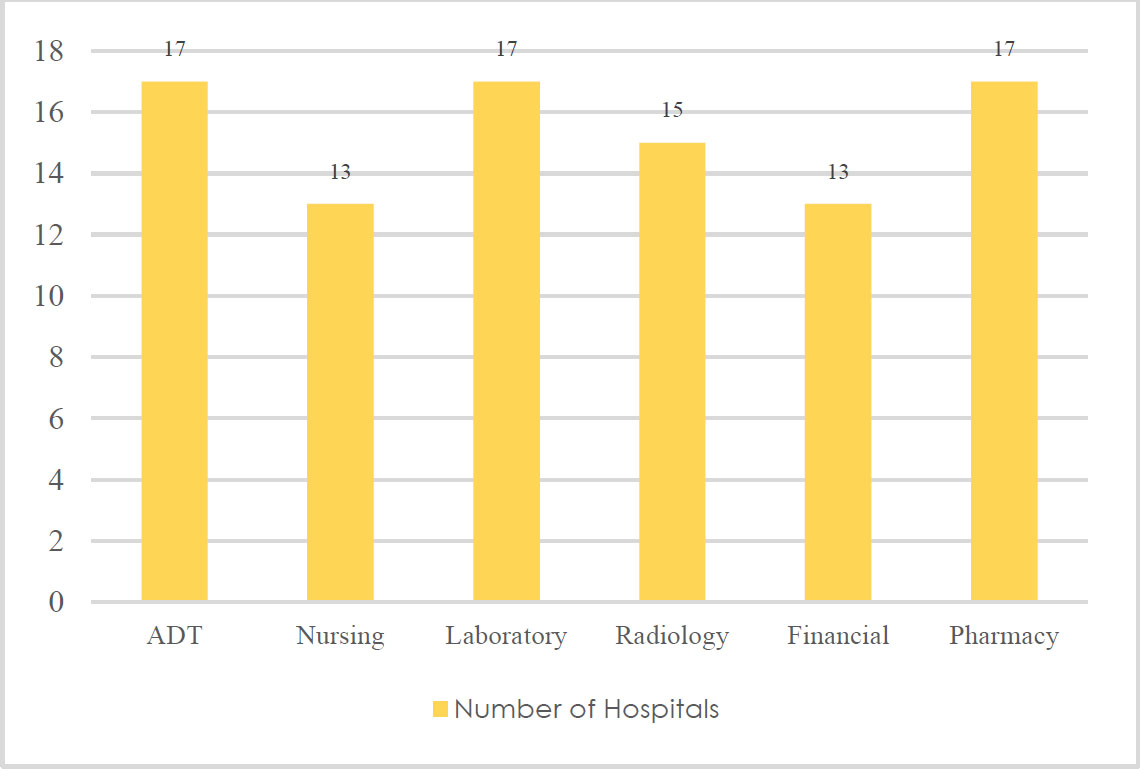 According the result of the study, 78% of the middleware used in affiliated hospital of TUMS had many-to-many configuration and other had a point-to-point configuration.

As shown in Table 1, the most widely used middleware in hospitals of the study is database-oriented middleware that used for integration of information systems.

Frequency of middleware used in hospital information systems of study

It can be seen from the data in Table 2 that synchronous communication mechanism is the most commonly used, because it had the added value for the hospital in terms of time saving and increasing the quality. Also, 70% of hospital, used the capability of web based services. In terms of HIS architecture, 23.5% of hospitals had a three-layer architecture.

As Table 3 shows, 35.3% of hospital had the capability of data exchange with other hospitals, while approximately the same amount (29.4%) had not.

Frequency of capability to data exchange with other systems outside of hospital (SEPAS: Persian abbreviation for electronic health record system of Iran, MOH: Ministry Of Health)

As the result shown, according to the participants view, the most appropriate approach of application integration is the service oriented approach (Table 4).

The present study was designed to determine the types of middleware and integration methods of HISs in affiliated hospital of TUMS.

Many-to-many middleware is the most powerful middleware logical model and the best option for the application integration, because it provides both flexibility and applicability to the application integration problem domain [25]. On the other hand, point-to-point middleware has an inability to properly bind more than two applications. To exchange information in this scenario, applications must be connected and information must be exchanged by a shared centralized server [9, 25]. With regard to the foregoing, as much as possible, we should avoid the point-to-point integration, unless no other option is available or a naive solution is required [26]. However, this study showed that the most hospitals use the many-to-many middleware configuration.

These findings of the current study are consistent with those of Chung et al. who found the service-oriented application integration is seamless whether it is done within the organization or across organizations [32]. As Gu and Zhang’s study showed the service-oriented integration approach can ease the composition of existing services and coordination new business process [33].

This paper has investigated the integration status of HISs in affiliated hospitals of TUMS. The findings of this study suggest that the HIS companies and hospitals must be considered to the standards of data exchange and interoperability for developing and selecting the systems. It was also suggested that the treatment protocols and clinical workflow must be clarified.

These findings enhance our understanding of the status of middleware to integrate HISs in affiliated hospitals of TUMS. We can use these findings in future decision making for information technology infrastructure.

The current study was limited by the cooperation of the participants. Some of the questionnaire items were not fulfilled.

Further cross-national work need to be done to determine the role and status of middleware for integration of HISs and other systems in the healthcare domain.